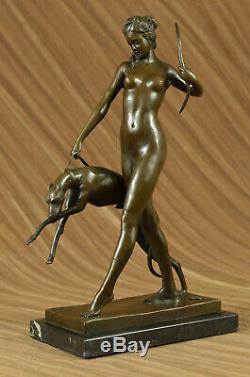 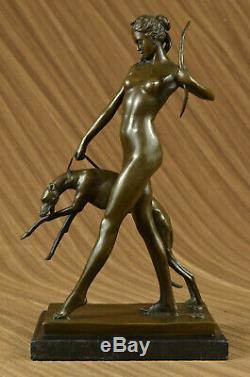 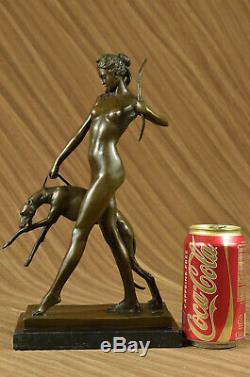 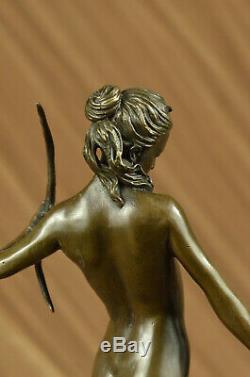 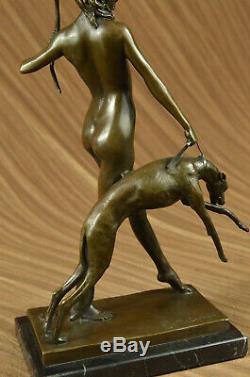 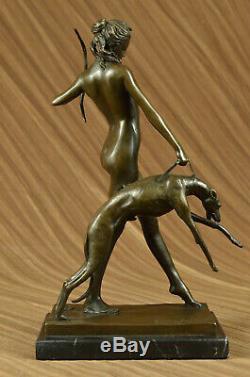 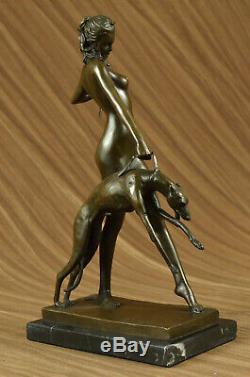 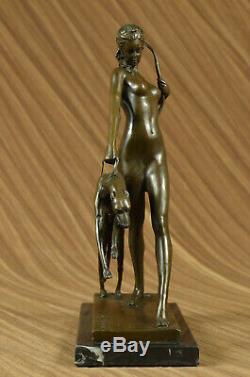 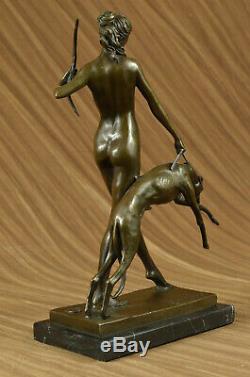 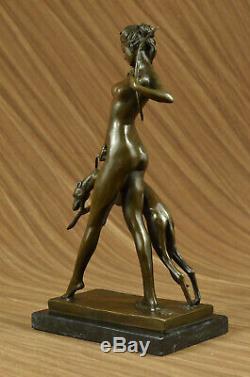 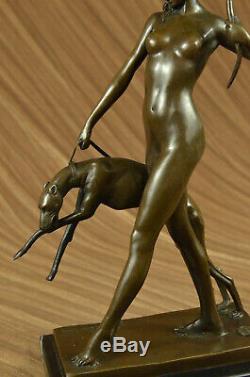 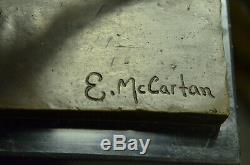 Sign flesh diana hunter with the hunting dog bronze sculpture marble statue. This product sheet is originally written in English. Please find below an automatic translation in French. If you have questions please contact us. Condition: the sculpture is in perfect condition. Bronze Dimensions with marble base each: height 12 \marble Size: 7 \Height without base: 11. Standing tall and naked, this bronze sculpture \She poses with her breasts exposed as she releases her bow.

You see the outline of his muscles and his belly as she leans back while releasing the arrow. Standing on her toes, she balance, providing details to her legs as she looks straight at his target. Her buttocks are tight and firm, her body is slender and natural.

You see the muscles in his back and arms as she shoots her bow. His hair is wavy but back in the wild winds of the forest.

At his feet, a great hunting dog. This sculpture was cast using the \Most myths began in Italy but were quickly influenced by Greece. It is difficult to accurately identify information about the huntress Diana, as she was also known as \You will find below a short myth about \Diana was an ancient Italian goddess of the woods. Capua and aricia, towns close to Rome, there are still shrines dedicated to the old Italian goddess.

His aricia sanctuary was on the shores of Lake Nemi. For this reason, she was appointed nemorensis diana, diana of the woods. The rites devoted to it are particularly brutal.

Human sacrifices were offered to the indigenous goddess. The diana priest was an escaped slave. Each new priest had to kill his predecessors for its offices. At capua, people believed that the preservation of the city depended on the fate of a long day sacred to the goddess doe. As a result of the influence of the Greek colonies in southern Italy around the sixth century bc, diane was identified with the Greek goddess of the woods artémis acquiring the attributes of the latter.

For the Greeks, Artemis was also the personification of the moon and her twin brother Apollo was associated with the sun. His father and mother were Jupiter and Latona. Diana believed her virgin body was very sacred and not for the eyes of a man. One day the hunter Actaeon was walking and fell on Diana bathing. Diana became so angry; she turned Actaeon into a stag.

Now he was unable to speak, so no one would hear ever about the naked body of diana. Acteon was then killed by his own hounds.

This sculpture is signed by th. Most orders are shipped within 24 to 48 hours of purchase.

Please contact us before making any purchase in these areas. Condition: the sculpture is in perfect condition. Bronze Dimensions with marble base each: height 12 \You see his mu. Increase sales abroad with the global list WebInterpret solution. The item \The seller is \This article can be shipped worldwide.